It should come as no surprise that I am a huge fan of Italian post-modern design. 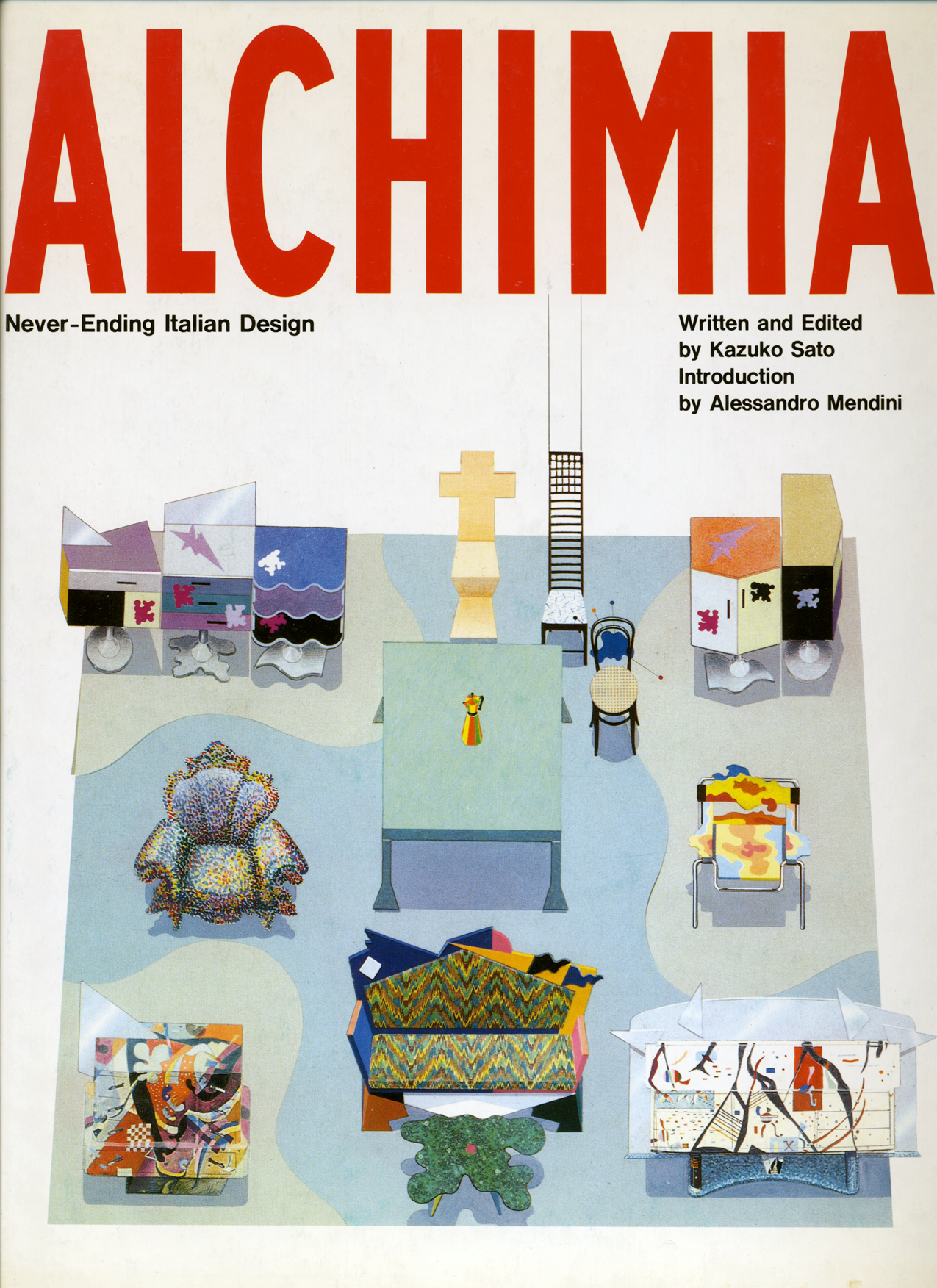 The snarky rhetoric and eye-wrenching styles are exactly the kind of non-standard aesthetic positions I appreciate in every facet of life. As a huge fan of the Memphis Group (arguably the movement’s best-known ambassadors), I thought I had known all there was to know about this esoteric sub-style. How wrong I was.

On a recent trip to The Strand over the holidays, I stumbled across a truly amazing monograph, published in Japan in 1985, entitled “Alchimia: Never-Ending Italian Design”. Inside I found a king’s ransom of bizarre furnishings, ideologies, garments, and drawings cataloging the influential, but oft-overlooked output of this forward-thinking troupe of designers and misfits.

Alchimia works on the values, generally looked upon as negative, of weakness, emptiness, absence, and depth, which are understood today as things lateral to what is exterior, solid, and violent, and hence as things to be removed. If the transience of the times does not allow certain objectives to exist, if even philosophy seems closed to the future, and if it is impossible to think of general and rational transformations, the Alchimia Group is concentrated in itself. It seeks details of thought inside itself, with the sole intention of signaling its poetic vocation. It performs its act of introversion, its minimal creative will, beyond all judgement. This is Alchimia’s ‘new morality’. – Alessandro Mendini, 1985

Alchimia, a design collective founded in the mid-1970s by Alessandro Mendini, represents everything that is great about the Italian post-modern movement.
Born out of the “radical design” movement, spearheaded in the early 70s by firms like Archigram, Archizoom, and Superstudio, Alchimia is the perfect melding of late 60s performance-based “classical” avant-gardisms, and the jaded cynicism of anti-design post-modern tendencies.

Alchimia, as an entity, preceeded, and indeed fomented Memphis Group’s anti-establishment rebellion. As time went on, Alchimia evolved very much in parallel with Memphis Group, at times sharing members, and definitely sharing ideologies.

While Memphis gets the lion’s share of the accolades for turning conventional modern design tropes upside down, Alchimia’s output is similarly stunning in scope and sheer electricity. Memphis presented itself as a grand gesture: “The New International Style”, executed with a purity of vision that made it hard to ignore. The plethora of items that flowed from the collective minds of Sottsass and company made a huge splash, and polarized critics instantaneously. Though there are obvious overlaps in impetus and aesthetics between the two camps, the differences in approach are huge. Memphis group remained almost entirely grounded in a retail mindset, producing limited objects of questionable functionality, that spurred collectors and admirers into bidding wars. Alchimia’s projects inhabit a more poetic space, encompassing drawings, installations, performances, costumes, buildings, and other highly idiomatic effluvia. NEW INTERNATIONAL STYLE VS TOTAL NEW FEELING. Their pieces are grounded in a struggle to approach the modern era from a romantic, context-aware standpoint. Not content to merely reject the past, but eager to re-invigorate it with the brazen energy of self-affacing idealism.

In many cases, the artifacts produced speak for themselves, in a truly singular vocabulary of embellishment and misfit abandon.

I’ve presented here some of my favorite projects from the volume.

An early project, and the perfect encapsulation of Alchimia’s giddy futurism. Everyday objects, purchased from a discount store are embellished with neon spikes and extensions, given new color schemes, and displayed against truly alien backdrops. The book gives only a shadow of the logistics of the project, to the point where I am unable to say if each image is in fact a photograph of an altered object, or a 2-d assemblage. Bizarre, surreal, and hilarious. The monograph describes the thrust behind these pieces as the ultimate “act of styling”, an unravelling of the art-world “readymade” into high-aesthetic absurdity. 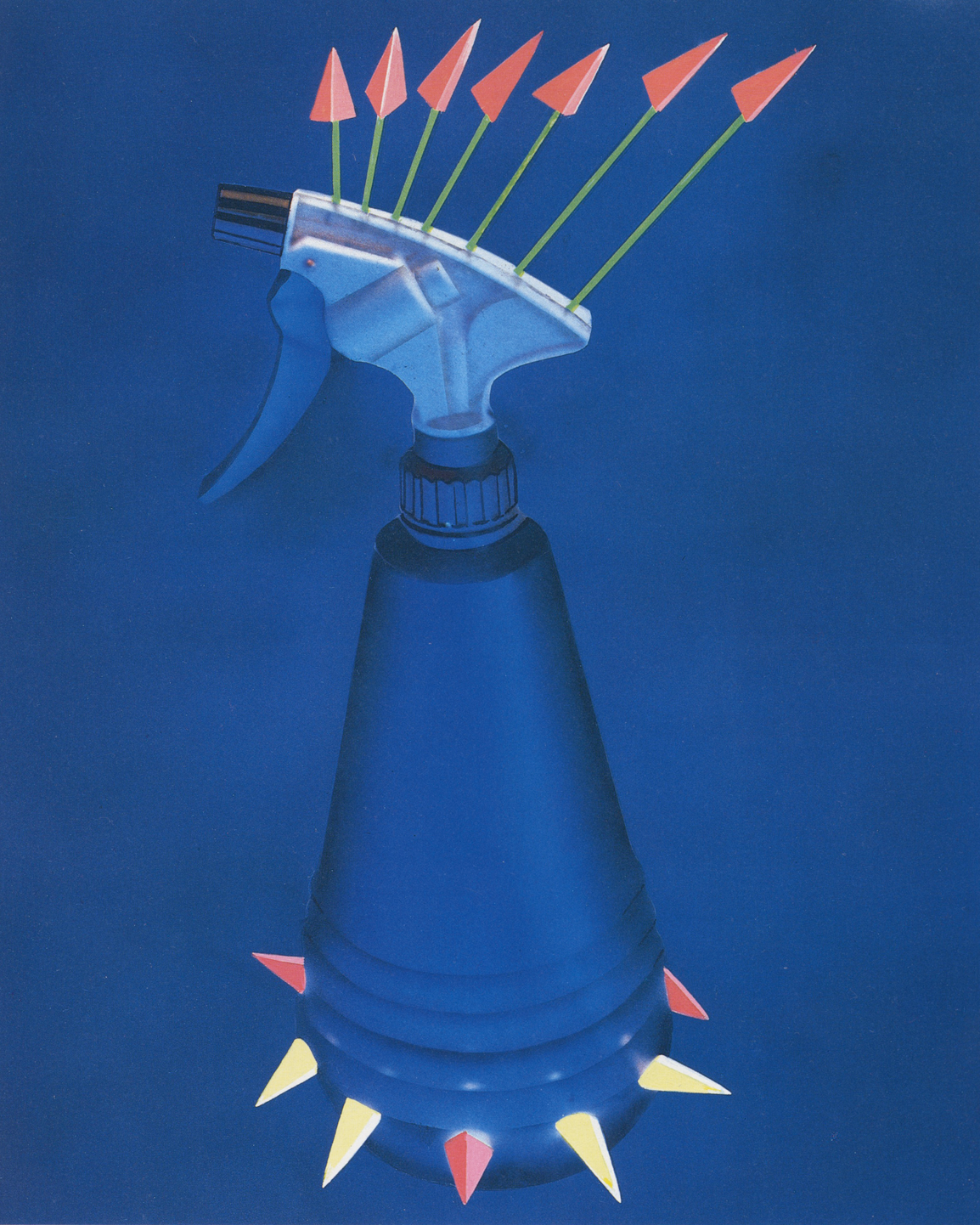 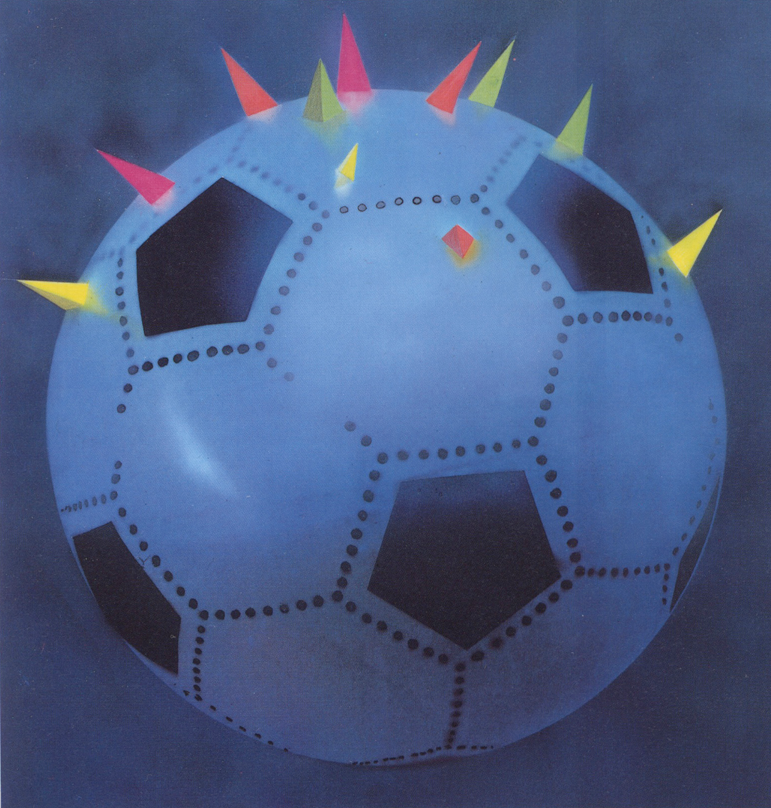 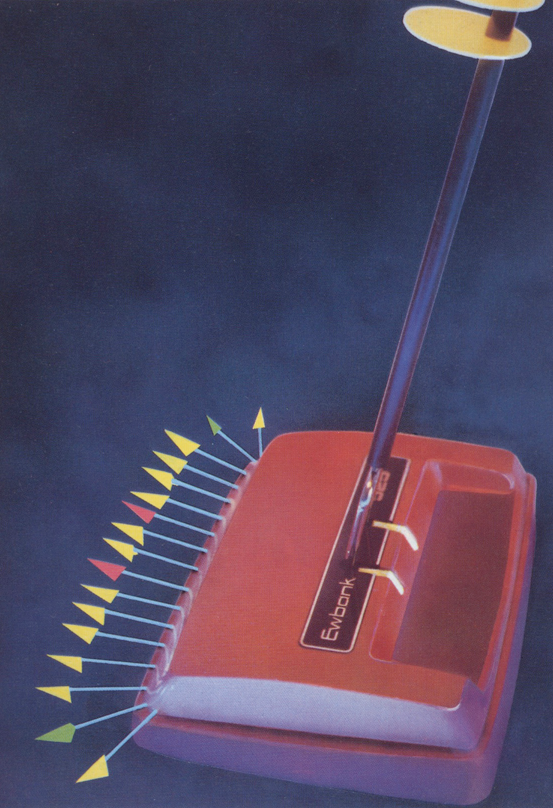 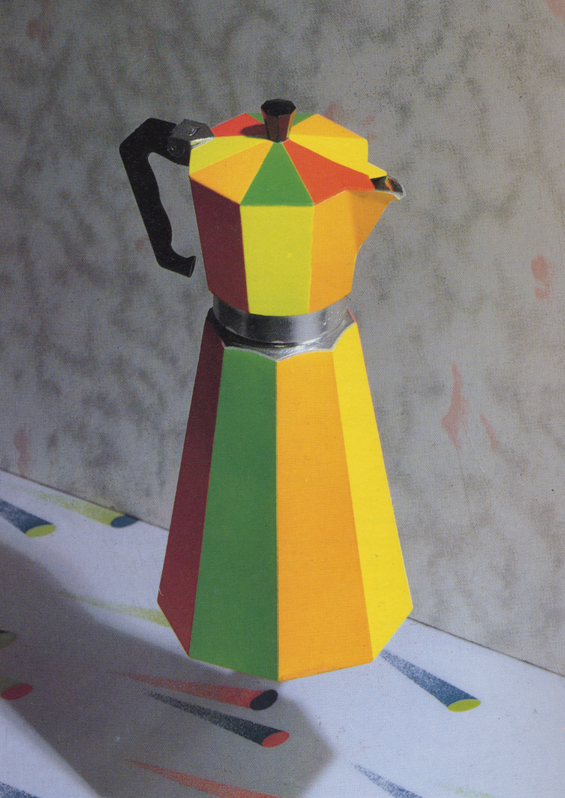 The pieces from this project, constructed in 1982-1983, are simply amazing. Somehow incredibly forward-thinking, while completely goofy. Each piece has an absurd charm paired with an impeccable restraint that pushes the objects into fetish item territory. Several of Alchimia’s enduring emblems are on display here. The clutch echoes the shape of a pennant flag, one of Alessandro Mendini’s favorite signifiers of capitalist futurism. The handbag outlines the shape of the human body, a favorite subject and foremost preoccupation of any Italian post-modernist worth his salt (see Gaetano Pesce, et al). The duffle is a testament to embellishment, and the soft “spikes” that adorn it are another Mendini totem. In other Alchimia projects, such horns are plastered to walls, ceilings, dresses, and bodies in a celebration of mutant energy. 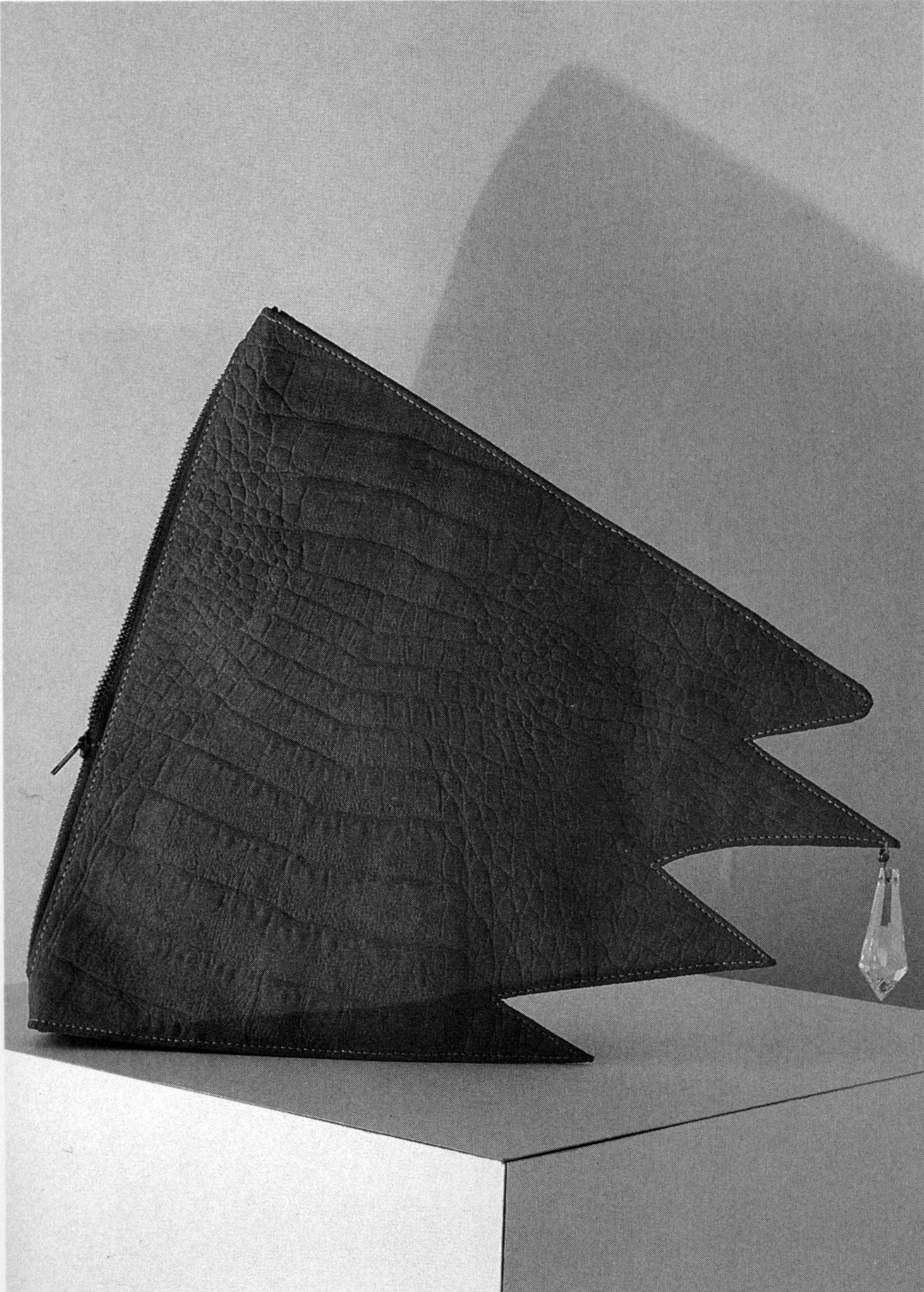 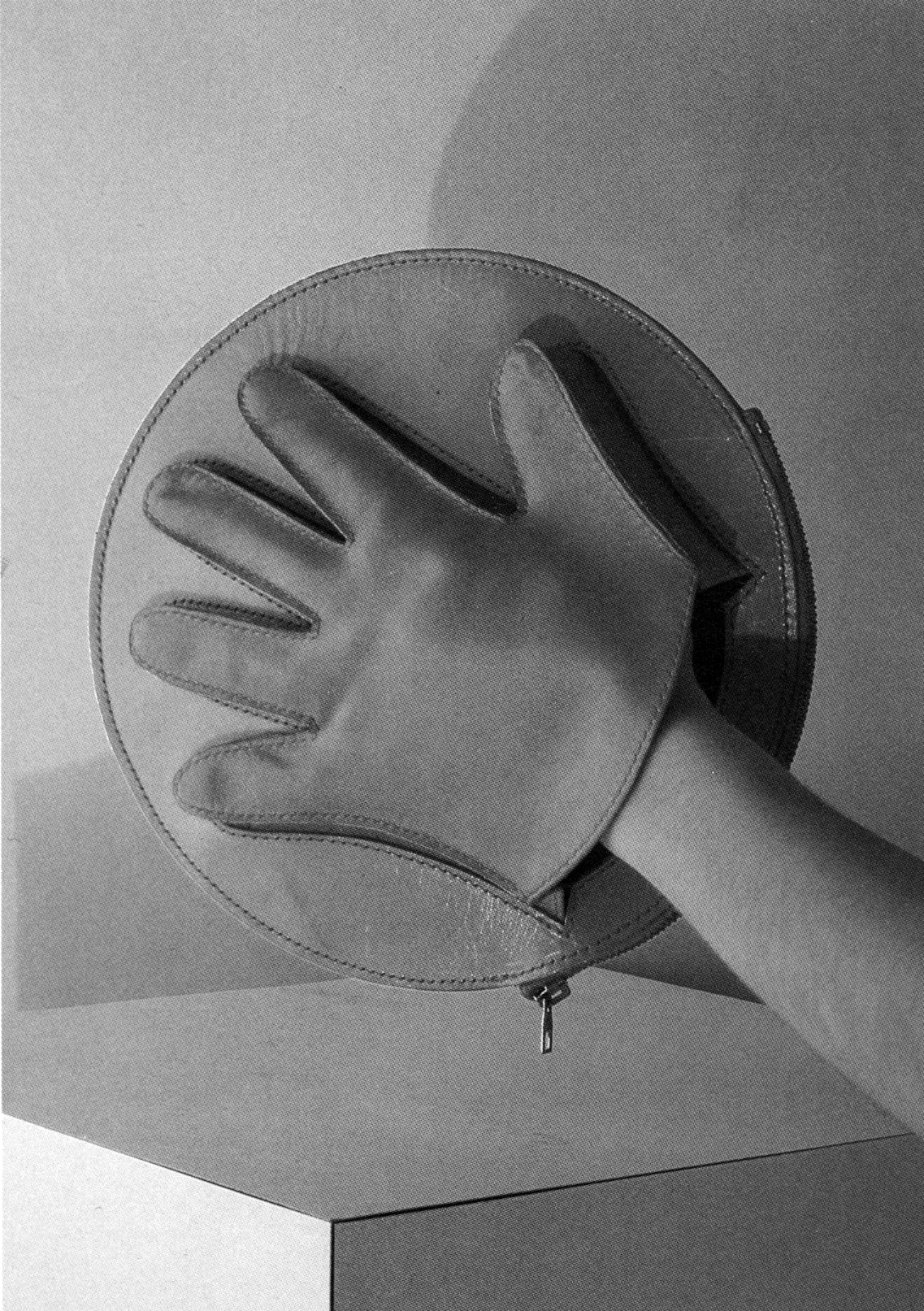 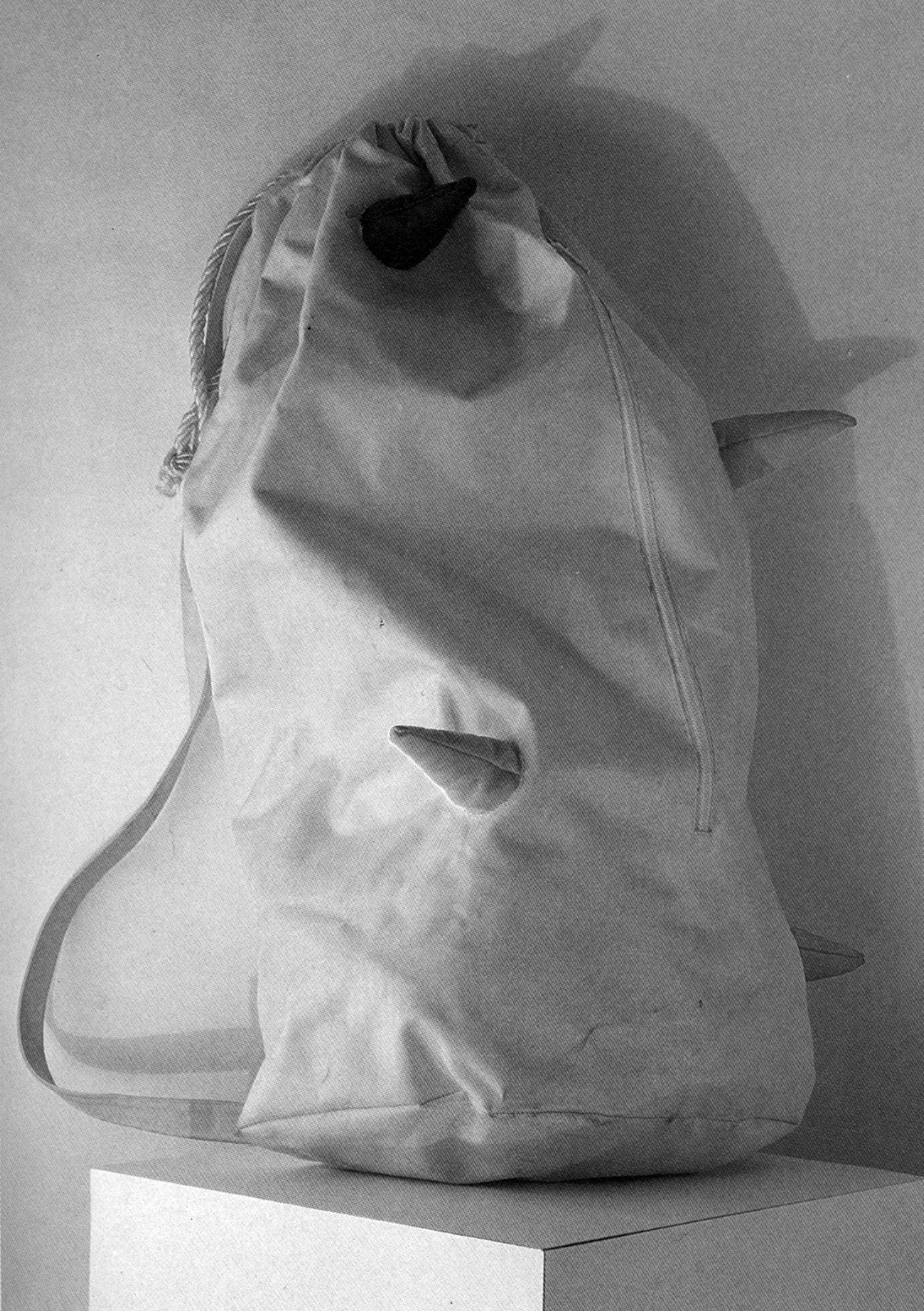 It was this collection of absurd re-imaginings that first brought the name Alchimia to my attention. As a student of furniture-making, Gio Ponti’s “Superleggera” chair was always one of my favorites. The economy, durability, and Shaker-esque minimalism of the piece give it an almost Utopian vibe. What better way to trot out such a feat of civic engineering then by slapping some World’s Fair pennants on it? Half baked brilliance. Similarly, the bentwood Thonet chair is haunted by an exuberant blue ghost, reveling in its stately negative space. The Joe Colombo “Universale” chair gets perhaps the most prescient facelift of all. Faux-painted in green marble, the plastic-pop object is reborn as bankrupt luxury item. Bruer’s “Wassily” grows ecstatic mold from every surface, as Dessau weeps. These pieces are frivolous yet optimistic parodies, shunning downer “deconstruction” for celebration, implied auras made manifest on the surface of each. 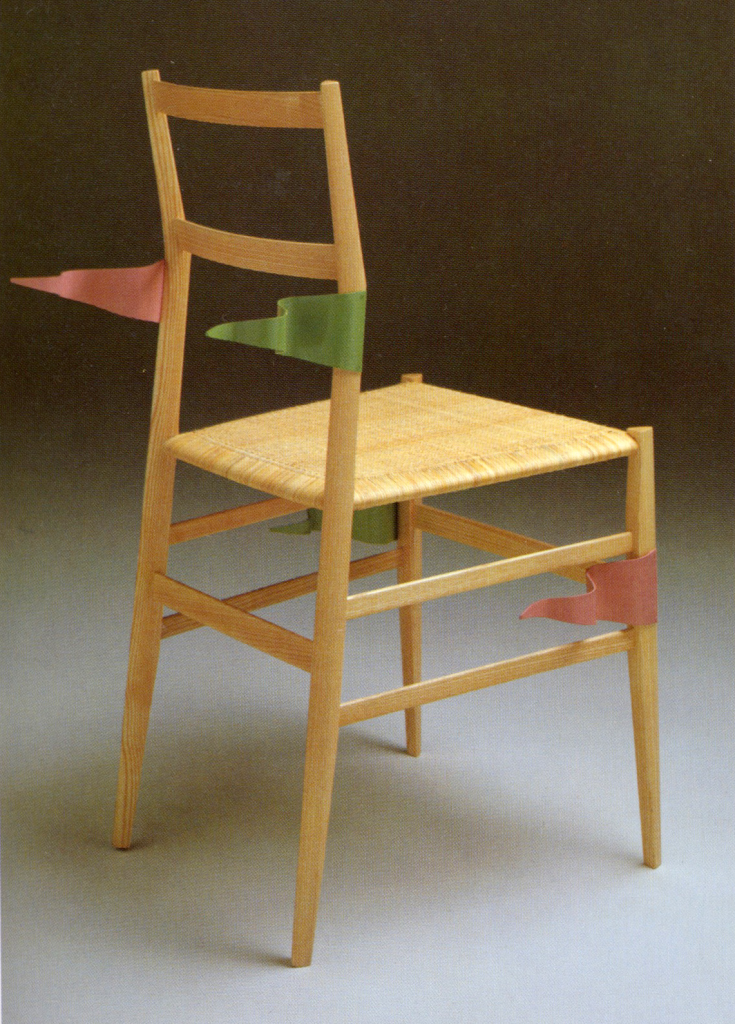 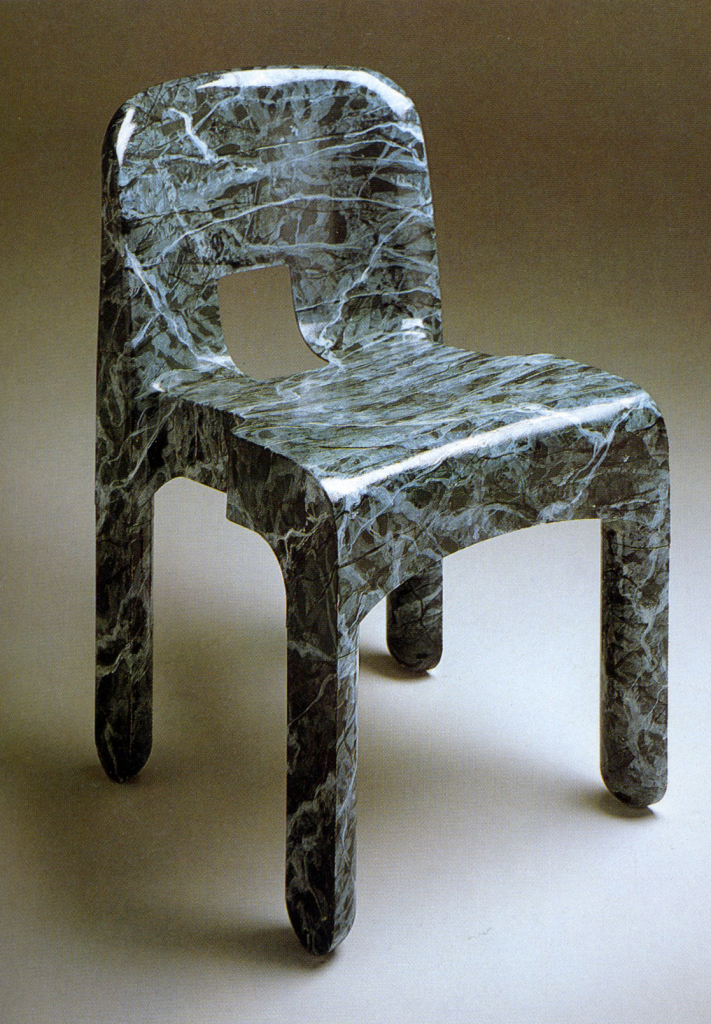 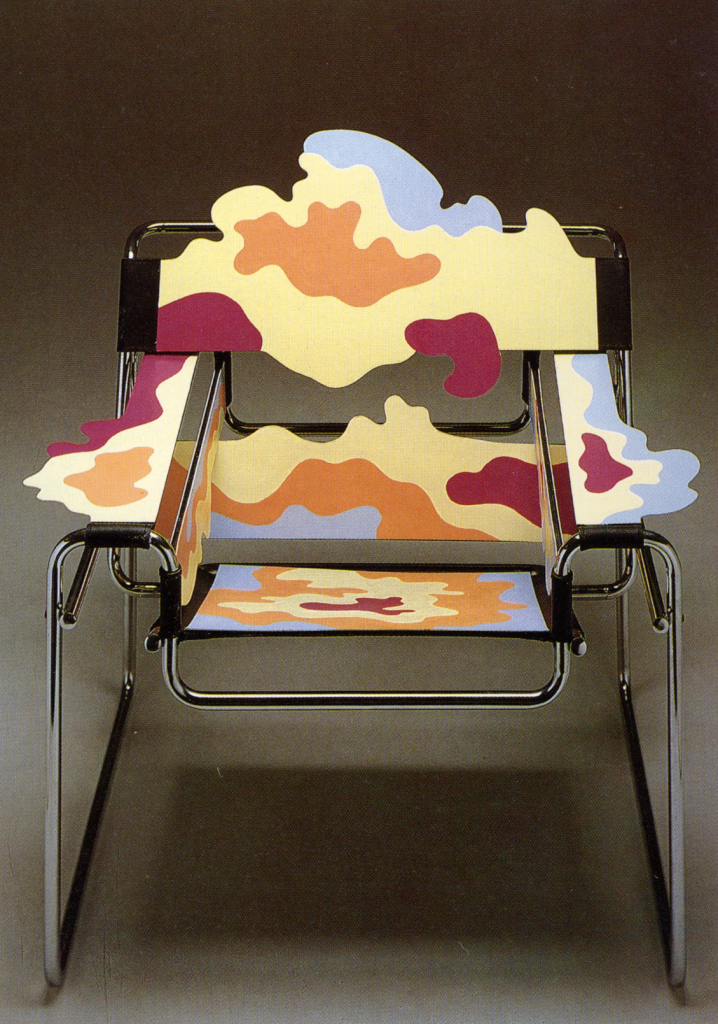 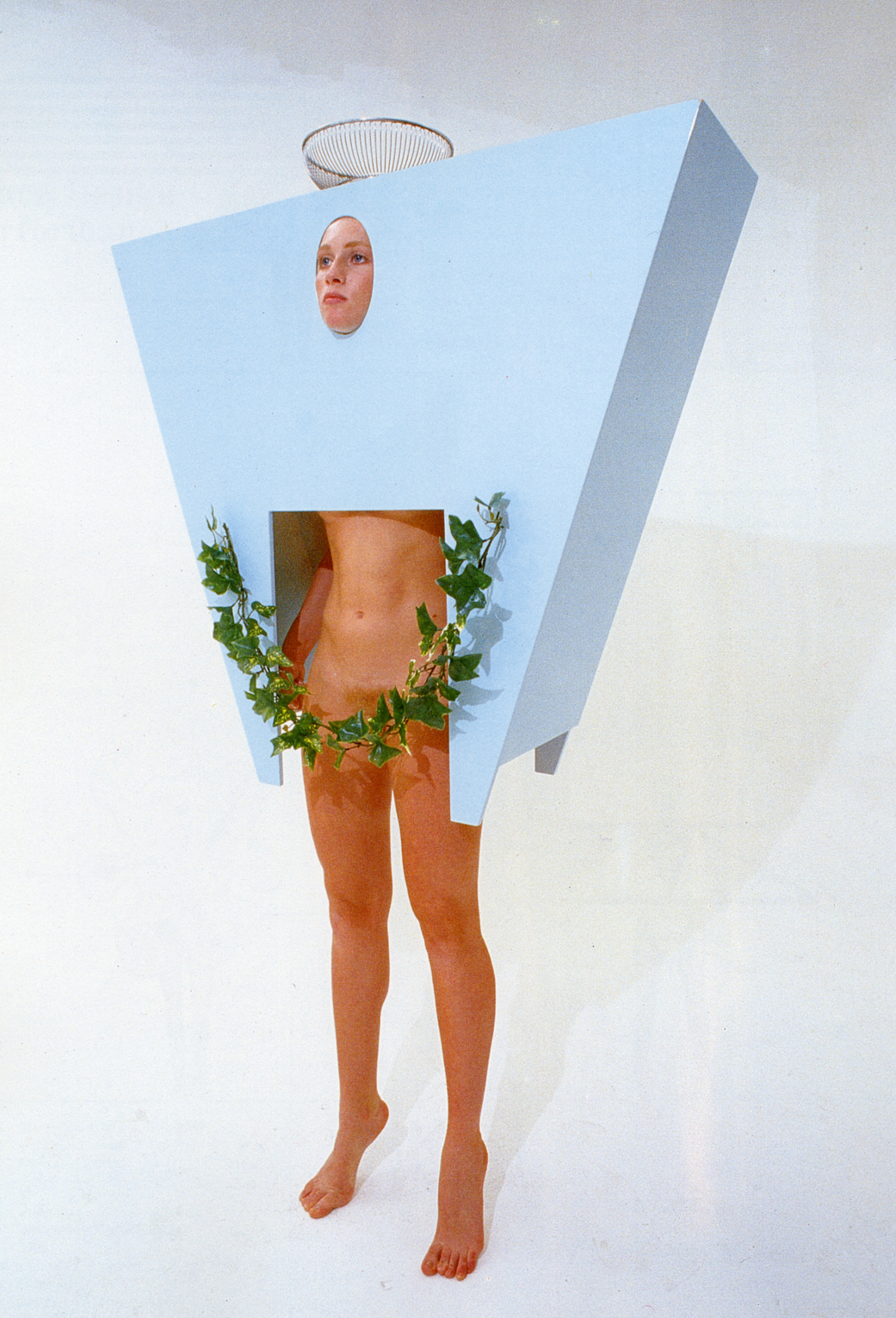 In 1982, Studio Alchimia composed drawings and fabricated objects for a performance at the Fiorucci showroom in Milan, entitled “Furnishings as Clothes”. The concept consisted of hard objects designed and produced with the scale and vocabulary of furniture, to be worn on bodies in an in-store performance. The results were truly bizarre, as demonstrated in the image here. There is definitely a tinge of old-school performance art at play here (Some of Alejandro Joderowski’s set pieces come to mind, or even Bauhaus theatre costumes), but my favorite element is the use of banal decorative elements, like the wire-basket crown and risque plastic-ivy sash. A cross-brow celebration of fashion and ornament, and a perfect compliment to Fiorucci’s Italo-Hollywood excesses.

The Bau-haus furniture collection from 1979 (I’m not sure I get the joke, but I love the ludicrously derivative name), was Alchimia’s earliest and most successful projects. At this time, Studio Alchimia served as a manufacturer and umbrella “brand” for a number of forward-thinking Italian designers, a good chunk of whom would go on to form Memphis just one year later.

In addition to the furnishings themselves, which are admittedly influential, the highlight of this effort is the supplementary images, where several pieces are inshrined in bizarrely evocative landscapes. Andrea Branzi’s “Stazione” (Station) cabinet is perched simultaneously by the side of a highway in the American West, and against the wall of a drab enclosure. Meanwhile, a red ectoplasmic olympian strides boldly over the piece, with an almost fascist intent. Again, as in much of Alchimia’s projects, the meaning is obscure if not entirely impenetrable, while the aesthetics are irresistibly evocative. In the image for Trix and Robert Haussmann’s “(Functional Formalism Column) No. 4″, some fragment of a ruined age has washed ashore on some cosmic beach, opening a single mysterious drawer, as Saturn (?) shines brightly. Paola Navone’s “Tindouf” cabinet (named after a province in Algeria), is bisected by an ethereal bolt of lightning, entering and exiting through mirrored cloud-portals. Trippy, self-indulgent, ridiculous, miraculous, and flamboyant stuff. 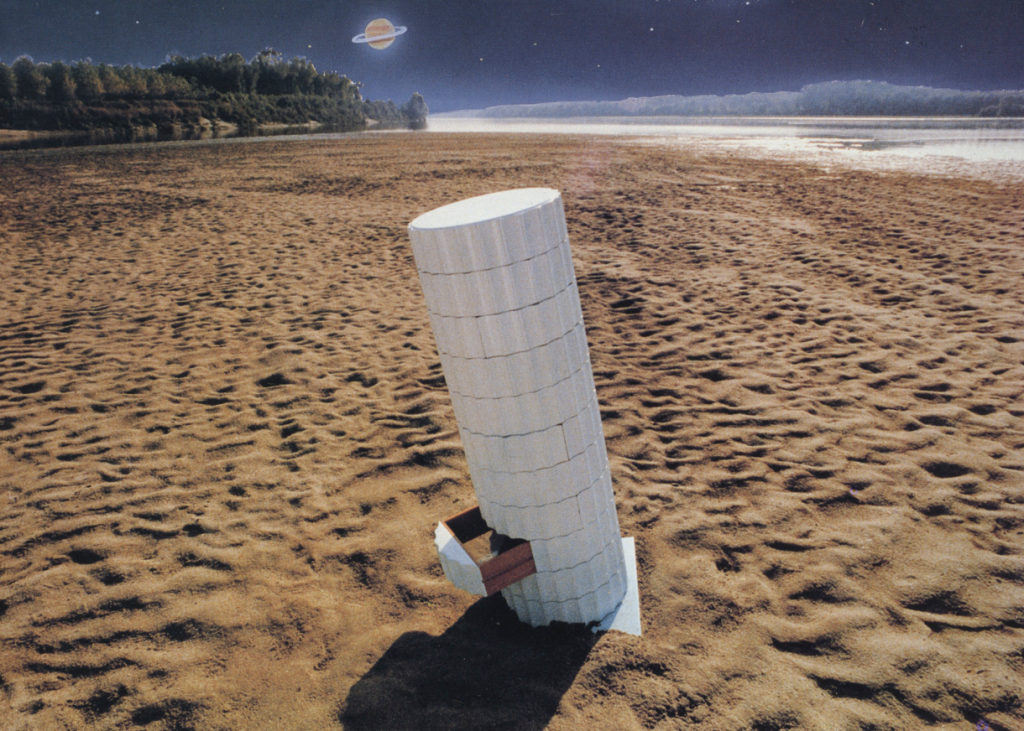 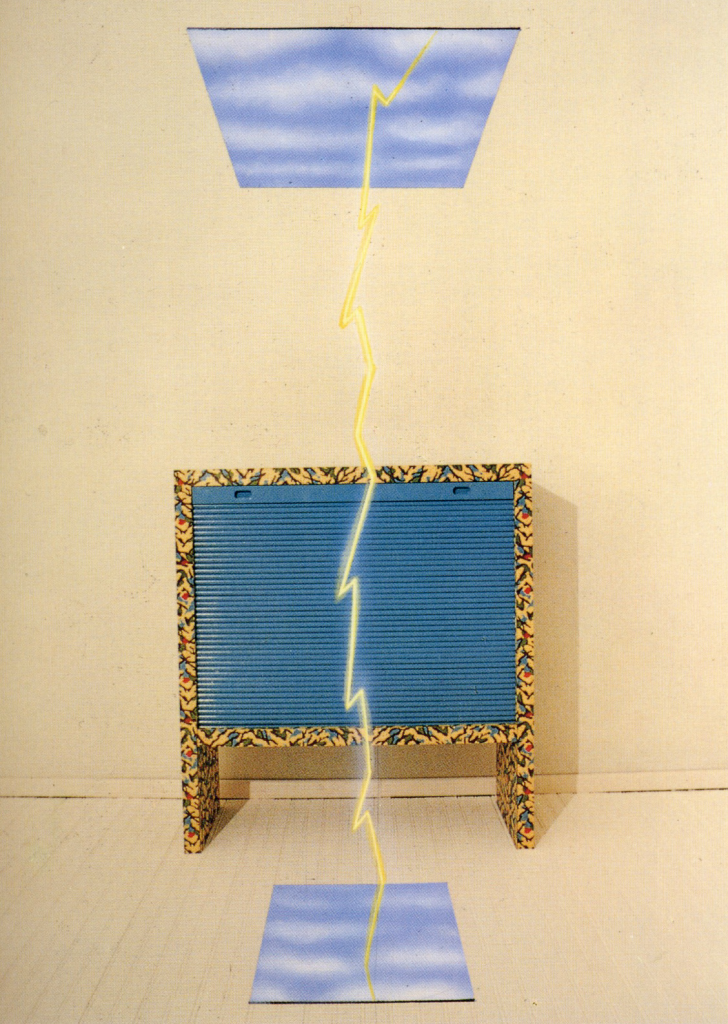 Alas, despite the gargantuan length of this entry (at least for me), I’m barely scratching the surface of Studio Alchimia’s sprawling output, which the book catalogues in impressive detail. Check my Flickr feed for a less curated overview of entire pages from this magnum opus.