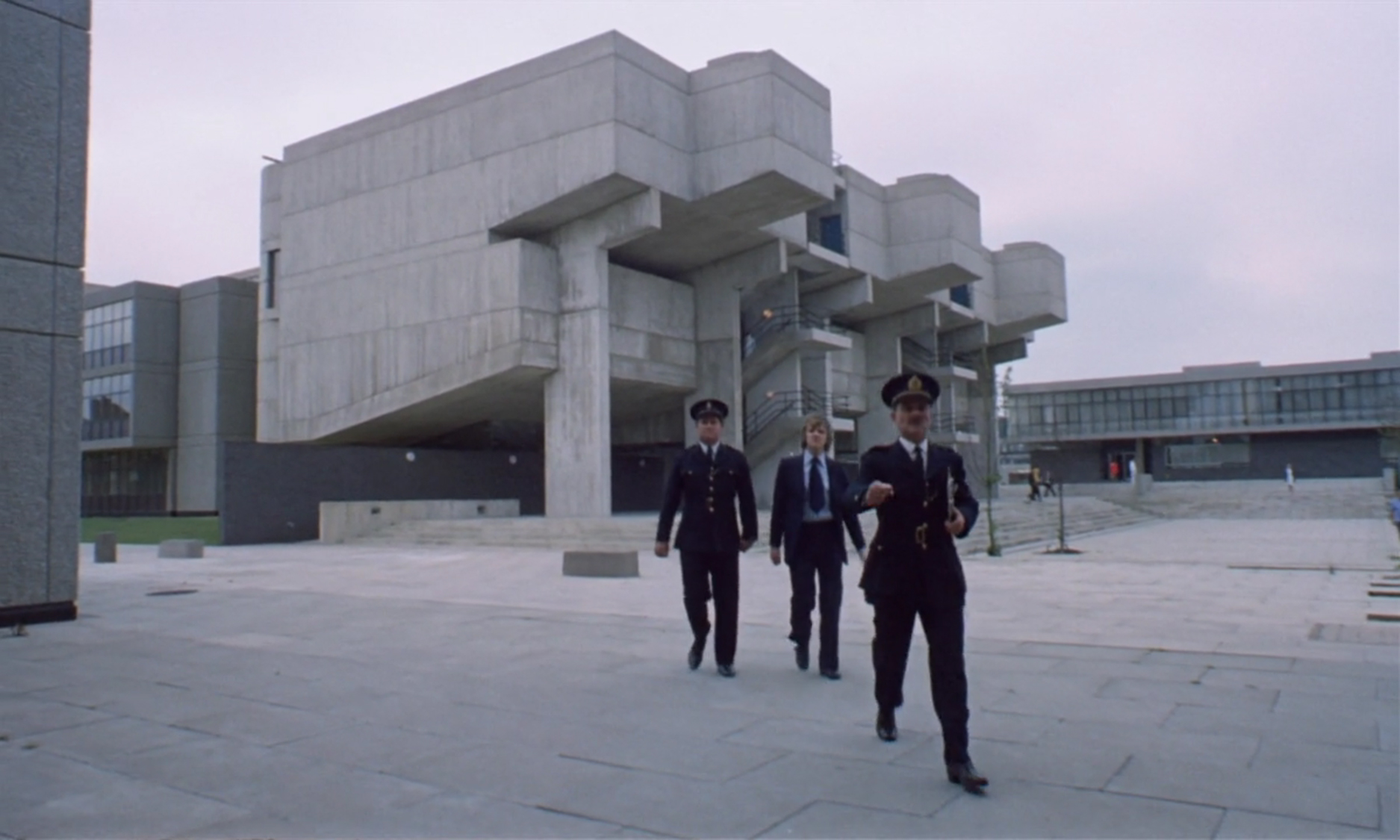 (The following passage was written for submission to the architectural publication Clog, for which it was subsequently declined. C’est la vie)

For me, it all started with A Clockwork Orange. As an aspiring suburban outsider, I rented the VHS in early high school, and reveled in its barrage of satirical aesthetics. The garish, ultra-modern interiors, the post-Soviet “Nadsat” slang, and most importantly, the looming, grey architecture of future London, which intrigued me to no end.

The film repeatedly showcased London’s Thamesmead Estates and Brunel University Lecture Centre, both erected in the mid-1960s as landmarks of high Brutalism. These populist landmarks are repurposed less than a decade later as icons of Kubrick’s failed nanny state, in one of the late modern era’s most cynical future visions.

Soon after, a family visit to the Yale University Art Gallery (Louis Kahn, 1951-53), and my curiosity was once again piqued. The poured concrete ceilings and massive glass walls captured that same looming modernity, but with dignity and light. Bit by bit, brutalism became my first signifier of “Design”, as an abstract concept.

Growing up in small-town Connecticut, my built environment was one of wainscoting, shutters, and cupolas, where “quaint” embellishments were all-too-common stand-ins for living culture. To my spongey brain, these massive buildings were powerful symbols of an alluring “other”. Urbanity. Art. Socialism. Academia. The Future. All I had to do was reach out and grab it.

After landing in design school at CMU, I formed a deep, and to my classmates, confusing bond with Wean hall, a partially subterranean concrete behemoth housing the school’s mathematics departments. Of course, the drab, imposing exteriors look best in the rain, which Pittsburgh delivered on an all-too-frequent basis.

These buildings were designed & constructed in a time of great anticipation, and great apprehension. The glut of innovation and prosperity that defined post-WWII America cross-bred with communist paranoia, birthing populist institutions for higher learning with paramilitary undertones.

It is this bunker / temple identity crisis which makes all Brutalist buildings so fascinating, and so divisive. In the 60s, they were bridges on Spaceship Earth; beacons of a state’s commitment to an educated, well-managed populace. By the recession of the 1970s, many were approaching ruin, re-cast as symbols of urban inhumanity.

When I wasn’t toiling in the Italianate wings of the Design School, I often found myself roaming Wean’s halls in solitude, the dampened acoustics and droning ventilation hum evoking deep space. Despite the concrete’s uniform ubiquity, every square foot bore the mark of humanity. The staircases peppered with graffiti (of a uniquely modest scale), the casting holes of every panel filled with plastic bottle caps.

Like all the best design artifacts, a brutalist structure is modest, hardworking, and devoid of embellishments, a stoic embodiment of timelessness. They stand in for our most base insecurities and our most egalitarian aspirations. Even today, they are enriched in semantic meaning by every inhabitant, from the vandal to the department head, and their livelihood is inextricable from our own.