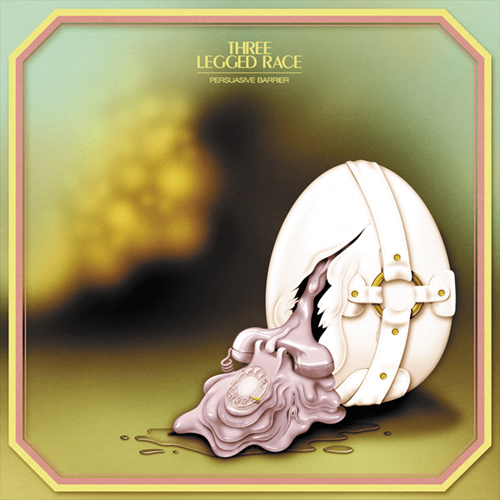 Kentucky wonderkind Robert Beatty returns to form with his first proper full-length in 4 years, released courtesy of Spectrum Spools. I’ve been an avid follower of Robert’s audio and visual output over the past few years, and this extended set of synthetic fables delivers a fully matured version of the bent sci-fi aesthetic he’s been busy defining.

It would be easy to lump Three Legged Race’s sound with the legions of retro-synth revisionists making waves lately, but that would be a mistake. Whereas many of his contemporaries have ditched the grit of the underground that birthed them in favor of pristine synthetics, Robert celebrates his basement heritage, with just-hi-enough-fi soundscapes of mysterious origin. The vibe throughout is one of slow-burning desolation, on a definite “hard sci-fi” tip, which never resorts to the hollow droning or crushing intimidation tactics that so frequently sidetrack efforts like these.

At times, wistful, single-note melodies plod through the vacuum, further heightening the sense of cosmic longing. Ricocheting squawks and garbled radio transmissions paint a picture of an alien sonic terrarium, floating in deep space. Translucent and cold, but filled with warm, fluttering lifeforms.

Robert’s relentless individualism and clarity of vision have served him well. He successfully walks the line between the alluring traps of linear song structure and total “kitchen-sink” style bleep-out to captivating effect. No sound exists in its pure form, and though he invokes vintage sonic tropes, his treatments are all his own, rigorously composed and executed. As his most thoroughly-composed effort to date, hopefully this LP will serve to attract more followers to Robert’s idiosyncratic world-view.

Listen to the almost Mort Garson-lineage ballad that is the album’s title track below: